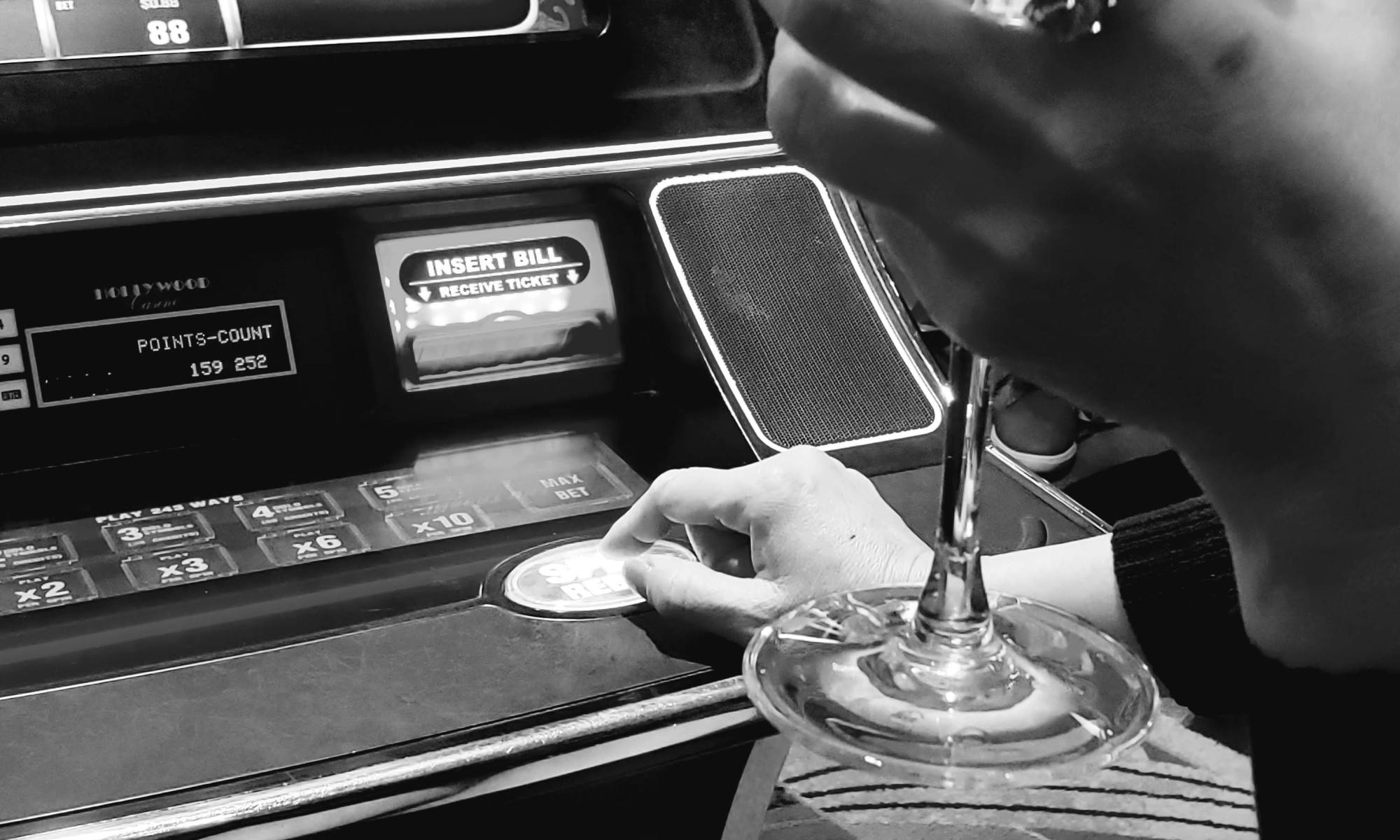 As soon as we walked into the casino it became clear that Malory knew all of the employees, the guys standing nest to the turnstile at the entrance, two guys dressed in suits with casino name tags greeted her like she was a sister, even the guy running around the floor with a computer strapped to his arm wearing a headset like a football coach greeted her by name with a big smile and a sort of hug that lacked any significant embrace, like they were both afraid something might rub off. I felt like I did the first day I transferred from Catholic school to public school. I was out of place, clueless and we all knew it.

Malory opened her purse. It smelled like cinnamon. She whipped a hundred-dollar bill out and held it in front of a dollar slot machine. The machine sucked it the C-note in and lit up. After Malory slid what looked like a credit card in and out of a card reader, an information screen greeted her by name, WELCOME BACK MALORY. It displayed some numbers next to the word ELITE, for which there was no explanation, like if they have to tell you what the numbers mean, you wouldn’t understand. She pushed buttons the size of Halloween candy bars that were spread across the playing surface of the big-faced bandit faster than Charlie Chan could say Birmingham. Lights flashed and symbols appeared then changed rapidly on a vertically oriented TV screen. Some sort of carnival music blared and beeped while she pushed the play button. Bells rang in perfect rhythm until the display read 0 POINTS, about ten minutes later.

The display blinked and rearranged the symbols on display like a child making faces to get attention. Feed me. I was a little stunned. I have never spent a hundred dollars and got less than an hour’s entertainment and at least a human smile, or a part from the Harley dealer, like a clutch lever, HD stands for Hundred Dollars.

“I don’t usually play this machine,” she said. “Let’s go over there.”

As we made our way through the crowd of old and middle-aged people wearing ratty shoes and old coats some of them sitting on chairs with their walkers folded and leaning like kickstands against their machines, I noticed a guy on a small stage off to the side of the giant room. He was sitting at a portable keyboard playing a Gerry Garcia song, singing

“…it costs a lot to win and even more to lose…”

People looked at him as if the sound coming from his amplifier might be a new way to dispose of their money. It wasn’t. They moved along looking disappointed. I felt bad for the guy. I got the feeling that he gets paid to sing and play as a prop so the pigeons can tell themselves they were there for the entertainment, not just to gamble their money away. Like the thought-provoking stories and essays are filler between, photo spreads in Playboy, the lone entertainer is in the casino to offer people a measure of sensibility as they steadily lighten their wallets and empty their bank accounts.

I made the mistake, after watching Malory push a fourth twenty-dollar bill in twenty minutes into the chirping “penny” slot machine of saying “Looks like I’m bad luck.”

She said, “No! There’s no bad luck. We don’t say that! Ever! There is only Luck.” She looked a little frantic for a minute and pushed another twenty dollar bill in to the silent baby’s mouth. It came to life.

“Here, you play.” she said, like it was an order, “OK, push that button.” Then, pointing at a different button she said, “This one, then that one. Again. Again. Now that one again.”

This went on until the balance of that twenty was gone. She loaded another hundred-dollar bill and started over. She must have hit the play button just right because after a few minutes her total got up to a hundred-twenty-five. Then it came back down to seventy-eight dollars. At that point, Malory took a deep breath and with Swiss precision hit a sequence of buttons which produced a paper voucher for seventy-eight dollars. She put the voucher in her cinnamon-scented purse, pulled out two more twenties and slid them into the slot. She rested her hand on the slope of the six-button bandit with her finger on the play button ready to wash my profanity from the session. A minute later, forty more dollars went away like it was never there.

She kept pushing that fucking button again and again as if there was some measure of skill involved. Apparently, the trick to gambling with a slot machine is expecting a different result each time you hit the button, or prying yourself open to the possibility that it will be different. I wanted to be sociable, so I tried it with some of my own money while she shredded another hundred dollars.

I couldn’t quite get the hang of it, no matter which finger I used or how much I tried to believe I’d win, I didn’t. Forty bucks was gone in a matter of minutes as if I never had it, like I left work early one day with no PTO left in the bank. After that I just watched. I felt like a gawker at a bad accident on the highway. I imagined white sheets spread over dead gamblers trapped in shredded wallets and purses. Paper vouchers scattered and dancing in the slip stream behind giant slot machines lumbering down the highway leaving mangled walkers and old gym shoes in their wakes, beeping, popping and singing a Chinese carnival song.

“Excuse me,” A shrill voice hollered behind me, “Can I get through please?”

I stepped aside. An old woman in a faded green cardigan wearing a cheap blonde wig was leaning over the handlebars of a walker with a basket and a headlight on the front. She pushed past me like she was rolling fast downhill with no brakes in a beeline to an idle penny slot machine where she had leaned a chair against the front. She gave me the hairy eyeball as she brushed by me in a half-rolling huff. I looked at Malory, amazed.

“Bathroom break,” she said. “They only leave the chair up for so long, then you lose the machine.”

Malory fed a twenty into the slot like it was her first time, pushed the buttons and watched as the numbers turned to zeros, again. She wasn’t surprised or disappointed. Just twenty dollars poorer.

It was only ten PM. I thought Good we’ll go back to my place and bring in the new year there, hopefully with a warm hug, a kiss and who knows what else, if I play my cards right. We chatted in the car about how gambling works and what her rules are. She has won big a few times, sixteen-hundred dollars once. I asked if she kept it or gave it back. She said she gave two-hundred to her friend, a hundred to her host, then left and put the rest of the money in the bank. Then gambled it away over the next two weekends. Gambling was her motorcycle, her Harley, or maybe her heroin.

When we got back to my house, she leaned toward me, gave me a half-hug and was out of the car before I could think a thought or say a word. Then down the driveway in her car and into the street. She headed west, back to the casino I think. Probably to give that seventy-eight-dollar voucher back to the slot machine. I think it was unfinished business that she didn’t want me around for, like I had done enough damage.

I brought in the new year with my dog, Buddy, the prince. He’s a small, but very serious Terrier. He only barks when its important, which is almost never. We watched the Twilight Zone marathon until two in the new year and went to bed. I was a little lonelier than I expected to be. But I wasn’t broke—Happy New Year! Looking at my change jars in the kitchen and the little blue pig full of dimes, I imagined pouring all of them onto a machine that just chewed them all up and spit out a Chinese cookie fortune. Thank you for playing.

This site uses Akismet to reduce spam. Learn how your comment data is processed.

A girl travelling around the world on a motorcycle.