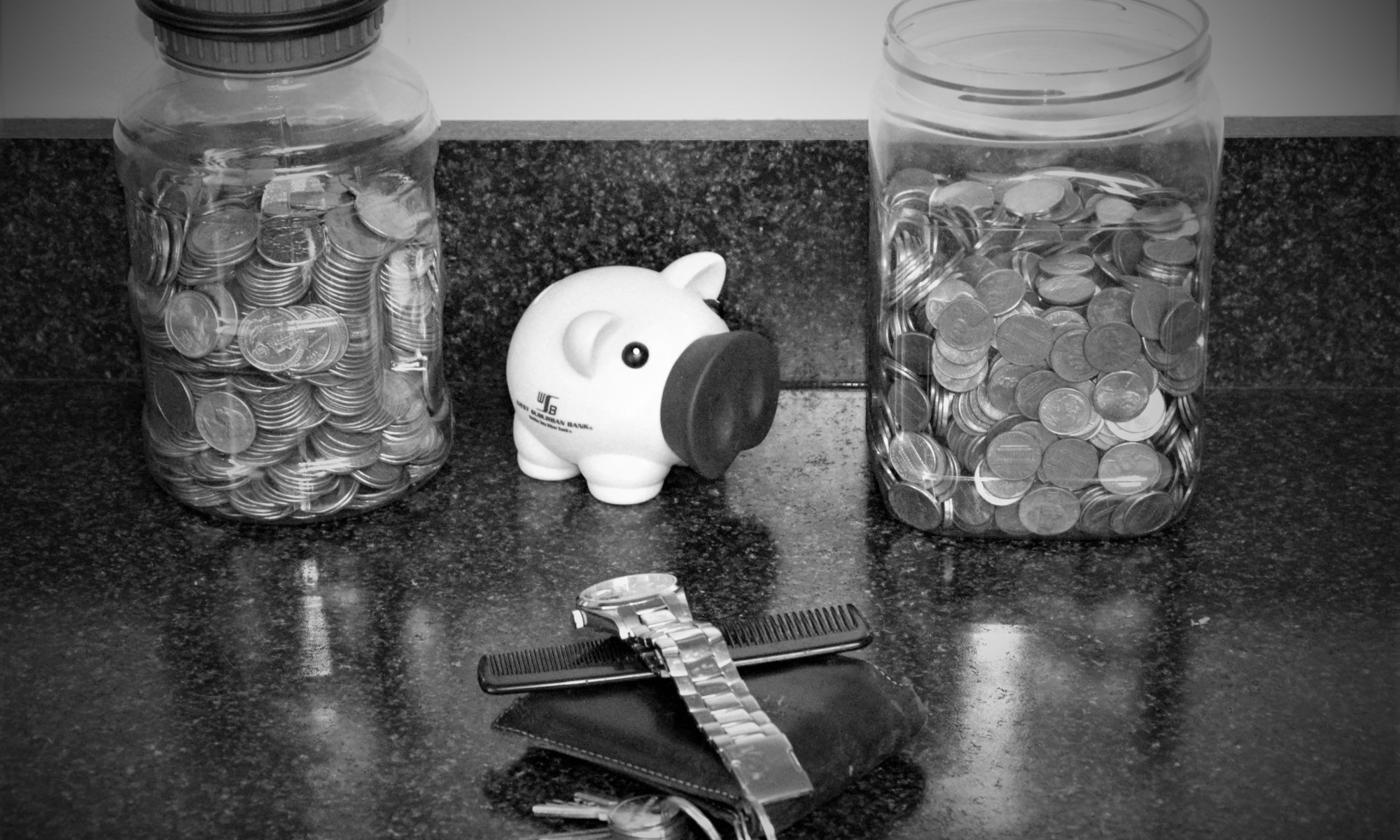 I put quarters in a jar with a top that has a counter in the lid. The display is stuck at $193.37. A blue, fist-sized rubber pig I got free at my bank is stuffed nearly full of dimes. Nickels and pennies are mixed together in a clear plastic jug.

I have these things in my kitchen, the second-most used room in my house, partly because I get a level of comfort from knowing that, as long as there are coins in those containers, I am not broke. I glance at them when I pass by. Sometimes, I move them around to feel the weight of money.

A few months ago, I took all of my coins to the bank when I needed a new rear tire. A teller poured my coins into the hopper of the coin-counting machine. I stood there with my hands in my otherwise empty pockets, wondering if I’d have enough for a Metzler ME 888. I was optimistic. I imagined what it would be like to have traction when the streets are cool or wet. The machine clattered for five minutes then stopped. The teller announced that I had twenty-six dollars and forty-two cents coming, then asked, “How do you want that?”

My optimism vanished. I couldn’t answer. My first impulse was to ask for my change back. I sensed the other customers snickering, like they knew I had unreal expectations. I looked through the glass wall at my bike in the parking lot with the cords peeking out of the rear tire. “Make it a twenty and a five,” I said.

I’d had this feeling before. Life was good and I had things figured out. Then I didn’t. Like I screwed myself and was left stupid and empty handed. I thought about that as I mounted up and rode slowly to the liquor store, then home. I never got past third gear. I felt pathetic. I should have walked to the bank to save myself the embarrassment of riding at parade speed all the way home.

I put a six pack of Old Style in the refrigerator and set a bottle of Old Crow on the counter. I emptied my pockets and dropped what change I had left into the banks. Three quarters snapped past the counter into the bell jar and clunked on the bottom like slugs in a parking meter. The display taunted me at $193.37. Three pennies and a nickel echoed against the bottom of the nut jar like rocks in a tin bucket. The empty pig stared at me past his big blue nose waiting for dimes that were no closer to the slot in his back than a new tire was to my scooter. I felt hollow every time I looked at the empty containers on the counter.

I missed the feeling those coins gave me. There was no weight to feel or bulky pocket-worn copper to see. I focused on the bottle of bourbon. That was my spare change, most of it, all in one bottle with a mouth too small to swallow a nickel. I had a lingering feeling of loss when I looked at the banks on the counter with too few coins to cover the bottom. Like the feeling I get when I smell the air freshener Doreen hung on the rear-view mirror in my truck. She left me without explanation or warning, like she woke up from a dream and suddenly I was a toad, or that she wasn’t.

Sometimes you think you have something valuable, like a girlfriend, and you get kind of bored once in a while. You get used to her and she seems to be used to you and it’s comfortable, like your old engineer’s boots. You can’t imagine that you’ll ever get rid of them. They’re a little beat up, but broke in and comfortable. Doreen was kind of like that. But women are not like old boots. A pair of good boots is always there for you.

A woman doesn’t have time for you because her sister has a serious outbreak of some kind and needs help, then her cousin gets out of jail, so she has to let him stay with her for a while. She doesn’t trust him so she has to stay close to home. When she answers your texts, it’s only one word and there’s no smileys or turd piles at the end of the messages, no hearts or rosy-cheeked devil heads, just “K” or “Gr8” or “U2.” She stops texting and never picks up. And eventually you just stop reaching out and she never tries to find out why you stopped calling.

That’s how it went with Doreen. I was suddenly a ghost, a toad-ghost, to her. I missed the smell of her hair and her smile and other things that made her nice to look at and be close to. But I didn’t feel tempted to try to hang on or get her back. I just let her go, which at the time seemed like it should have been harder to do. A feeling of loneliness crept in which I guessed was because I was alone, but never because I was missing Doreen.

I wrestled with why I didn’t miss Doreen. We had some good times and she did tell me she loves me and I told her I love her, but that was all probably because we both knew we should be in love to make love and live together. Nobody wants to admit that they are with someone all the time just for sex or to share expenses. Like it’s better to think you have what you think everybody else has, than it is to show that you don’t.

About halfway through the bottle of Old Crow I looked at the jars where all of my spare change used to be and I realized that I didn’t really miss the spare change, I missed what it represented. There was a sense of security and worth that came with those coins. But it was all in my head. They weren’t worth much more than a twelve pack and a bottle of cheap whiskey and I guess I knew that deep down. Still, I liked having them around.

A few weeks later, I took my uncle Lester’s fat bob tank off the shelf in my living room and poured his ashes into his old Army canteen, then sold the tank for two hundred bucks. I bought a new Metzler ME 888 rear tire and had enough change to buy another bottle of Crow. And since I paid with paper money for the tire and the bottle at different stores, I had some coins to drop in the banks when I got home including four dimes for the blue pig.

Since then, I’ve slowly built up my collection of spare change to a comfortable level. With the new tire on the bike, I don’t have to crawl around corners anymore and I never slide unless I want to. it feels good.

I saw Doreen the other day, walking alone. She waved. I pulled over. She was on her way to the bank with a purse full of coin.

She shook her purse. “Cashing in to pay for some new ink, a dragon on my thigh.”

Philosophy is all about being curious, asking basic questions. And it can be fun!